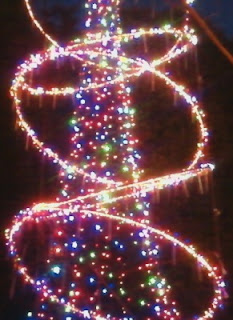 So now, we have a definition of a shimmy, the next question is how to do it. And, no, the answer is more than “move very fast”. There are a number of ways that you can move. Let’s take the two most common shimmies the “shoulder shimmy” and the “hip shimmy” – that isn’t two shimmies. It is at least seven!


There are (at least) two moves known as a “shoulder shimmy”. One moves the shoulders horizontally and one twists the torso.


The horizontal shoulder shimmy is very isolated and used only in Orientale – it isn’t used in folk (unless you want to layer it with a shoulder roll). In its pure form you pull the shoulder back and push it forward without twisting the torso – or lifting or rotating the shoulder.


The more common form may include some horizontal shoulder movement but is mainly driven by twisting the torso. But it is more complex than that. You can generate the twist in different parts of your torso to give a different flavour.


My own default hip shimmy is driven by the concentric contraction of lateral flexors - particularly the quadratus lumborum with the internal and external obliques (I had to analyse it for a ‘varsity paper but needed the help of a sports physio!). In layman's language, I use my waist muscles to drive the hips up and down - but the knees bend to accommodate the movement. (They have to.)


Most people learn to shimmy by initially bending and straightening alternate legs. This means the hips go up and down but the lateral flexors just go along for the ride. (This is sometimes referred to as a "knee shimmy")


Another common (older style?) shimmy involves twisting the hips back and forward. Again you can drive this with the obliques or the legs. (This is sometimes called a "Folk Shimmy")


The Modern Egyptian shimmy is really a refined version of this driven by the legs (the knees are not "straight" as in locked - but straighter to look good under a slim line skirt). You slightly flex one leg then straighten it using your quads. This drives the hip back rather than up.


A recent invention is the Salimpour glute driven shimmy. This looks to me as if it is almost getting away from a relaxed shimmy and moving more into a vibration. However, many people do use it.


As with the shoulder shimmy, people often don't do a "pure" version of a shimmy but mix and match - sometimes always but sometimes for a particular effect or layer. And few people know or care what muscles are doing what. What is important is how it looks; whether it fits the music.


Then there is a whole family of “three-quarter shimmies” where your hips move only three quarters of the time. How the hips move and which leg carries the weight make this a whole article in itself (maybe later).


No matter which shimmy you use, it needs practice to be smooth and controlled. It is important that the underlying technique is correct. So, start slow and build up the speed. If you lose it back off the speed – then bring it back up. Remember it should be in time with the music. Ideally it should be relaxed – even when small and fast.


Once you have the speed – go for endurance. Can you shimmy for a whole track? What about something longer?


Then you “just” add weight shifts and layers. Try shimmying on one leg. Which shimmies work best? How does shifting your weight change the feel of the shimmy? What about walking with a shimmy? Figure eights? Oriental circles? As you approach some layers you may have to go back to first principles and work out exactly why you lose your shimmy at the back of your circle or whatever.