Much is often made of Belly Dance being great for improving physically flexibility – but what about mental flexibility? It can give you a great mental workout as well.

Take last weekend. It seemed like a simple gig supporting the local International community. We’d come along and dance for their get together. First hurdle – did I have any Middle Eastern students? Ideally recent immigrants or children of immigrants? No, but I’m the child of Hungarian parents and some students are Dutch. So our support was declined – until 10 days before the event was to be held when they decided that my site included enough multicultural material for me to pass.

Then there was the choice of material. Nothing to alienate conservative Muslims. I bit my tongue as I knew we could do nothing right if any really conservatives turned up. However, we have a wide repertoire of folkloric items. Cane is always popular. Then I realised the venue was small with a low ceiling and people would be sitting up close. No cane. I suspected my beledi would be incomprehensible to non-Egyptians. No beledi. With those that I had available at short notice it would be ghawazee as a solo. Maybe. Ditto haggala – and as a woman well past the first flush of youth I’d not be a sensible choice.


Okay – khaleegi. Our stage piece is for 10 – but I could only get 4 at short notice. A good thing 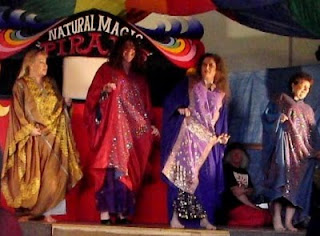 too. Did I tell you the stage was small? 3 by 10 – over here we think in metres – and that would have been small for the tableau. But the organizer was old school – this was feet. So, restage and reassign parts – this is a group framework with solos and duets not a choreography with everyone doing the same thing. Add two hours of rehearsal leading up to the show.

So, one student thought this would be a good time to refurbish her costume and she unpicks it and starts reassembling it by hand. (For those of you who have never made a khaleegi thobe there is over 6m of fabric – that’s 4m of sleeve hem to restitch with slippery sequinned fabric.) Three hours before we are due at the venue she rings to say she’ll never get it back together in time. Thank goodness for spare khaleegi thobes. Only, I made the class set out of cheap material and now it has to be ironed – by me. (Along with putting on make up and running a last minute rehearsal)

Our second item? I took the easy route and did a stock belly d 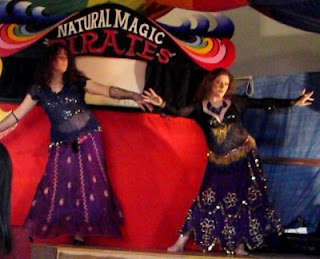 ance piece – covering as much skin as possible with body stockings, sleeves and gauntlets. The audience –Korean, Japanese, Indian, Welsh, Australian and Somali - were not at all offended.

Overall, it went down very well. The students got a kick out of not only pulling off a nice piece of dance performance but also realizing that what they learn in class is not definitive. They are being given tools. They can adapt. Now they don’t just know this in the abstract – they know they can do it.
Posted by Kashmir at 10:43 AM 1 comment: