The New Normal and Dance Classes 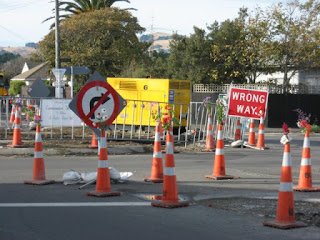 A recent offer from an overseas teacher to take workshops in Christchurch brought the reality of the new normal to my consciousness. Apart from the difficulties of arranging a workshop for someone unknown in the community at short notice, I realized I wouldn’t be able to do it even if Fifi gave me two weeks notice.


Over two years (and 13 218 earthquakes) on, here’s the reality of living in Christchurch if you are interested in dance.

Many venues are damaged. Many fell down or have been demolished. Many others are unable to be legally used (Red or Yellow Stickered). Space that is left is at a premium (any space – forget having a dance studio with mirrors). With enough warning you might be able to get a class to move so you could use the space for an extended time for a workshop. But not every one is willing to give up their own class – or multiple hourly hires. So if you can find something it won’t be cheap.

Something you organized last week (let alone last month) may no longer be available. When they decide to repair you get very short notice. I have heard with private homes of only 24 hours notice being given - although a few days is more common. Buildings are also being closed at very short notice. A few weeks after the February earthquake, I was in the middle of teaching a class when the hall we were in was deemed unsafe and we had to leave. But even within the last month or so, our local shops were closed and the shopkeepers given less than 8 hours to vacate.

The roading infrastructure is being repaired. That’s great – and when it’s finished we’ll be able to get around like we used to but in the meantime …

Our local bridge has been closed one way for about five months – and it’ll be closed for at least another seven. The way out is at best rutted gravel. On some days you get to drive on the side that is just half a metre of semi compacted gravel with wheel eating potholes. The way in is an extra 3km and until last week was also rutted gravel – with the additional fun of threading through a road narrowed by cones as they try and fix something; from there a choice of a maze through a shifting set of streets – or chance the river road isn’t under water or closed for repairs.

Then you hit Estuary Road where the underground services are in the process of being repaired – ongoing for the last two years. Sometimes one direction or the other will be closed. There is a sink hole that keeps appearing that is about as long as my car and about half a metre deep.

When they finish our bridge they will start on the next one over. So then our bridge will be able to carry both 10,000 cars a day from South Brighton and will be joined by as imilar number from New Brighton. Yes, in theory the New Brighton people could go upstream (assuming they aren’t repairing that bridge). But the road around the river which is now below high tide level and sandbagged, still floods. This does not just mean getting brackish water sprayed under your car but also the regular flooding has destroyed the road service and it is heavily pot holed. Cover the potholes (some quite deep) with water and it really starts to get exciting.

But all of that is known. I can plan an extra few minutes as I know I will have to detour to get home. What you cannot plan for is every other road. You never know when you set out somewhere whether or not the roads will be open. On two occasions I have been sent in circles in areas I was unfamiliar with trying to get back to where I wanted to go. Oh, and many landmarks – buildings and shopping centres have gone and are replaced by sections of rubble so often you have no idea where you are. (And no, GPS systems don’t help – they can actually make things worse trying to push you back into closed streets)

My students are reporting over 15 minute delays due to detours. Add congestion due to vehicles threading through fewer and narrower roads and you can add at least an additional 30 minutes to cross town.

The upshot is many people don’t take non-essential trips – such as going to dance classes, or won’t travel at night (easier to get lost in detours or hit unexpected potholes or flooding), or arrive with nerves shot and totally stressed.

Many of us are stressed. Still. Yes, I know – boring. Apart from the roads, there is the effect of continual aftershocks which some people cannot handle as well as others – adrenaline surge followed by crash over and over does nasty things to your body. Yes, the aftershocks are now infrequent and mostly light but for many the damage is done. (In the past week there were only 14 aftershocks – all small.)

A very small number of people are still living without services such as sewage. Many are over-crowded. (A two bedroom flat next to my parents’ was home to three families with children. Some were sleeping in the garage and some in an old horse float!)

Then there are a list of losses, including for some the death or serious injury of a close friend or relative; thousands have lost their homes; some have lost their whole neighbourhood; many have lost their jobs (and income); many are losing their schools, some are upset about the loss of the architectural heritage which defined the Christchurchness of home.. Add to that a swag of “things” smashed, damaged or irretrievable – sure some things can be replaced. But some have emotional significance and are mourned.

Adding insult to the loss of income or equity there are increased costs as insurance premiums skyrocket and vehicle repairs increase with the crappy roads.

Then there are a range of physiological effects. Not only feels of loss, but unease, lack of trust, uncertainty, fear, anxiety. All made worse as people struggle to sort out insurance and get repairs done (if they still have a house) and live day to day.

No wonder then numbers are right down. By offering extra classes outside my own studio (being in the Eastern suburbs is a distinct disadvantage with most of the written off houses and the worst roads), and being willing to hold classes even when only one person can make it, I’ve held my losses to only half my pre-earthquake income. But I don’t have extra energy to organize workshops that won’t be filled in venues that I cannot get hold of.