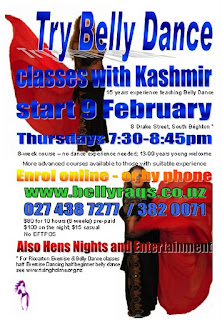 I’ve just finished doing yet another poster run for my next beginner course. All up for Term 1 I have clocked up over150km. Why? Because I’m trying to reach those who are not already in the loop. All my students’ friends and colleagues have been informed of how much fun belly dance is. Yes, I have a web presence (and have since before I started teaching on my own). Yes, I do Facebook – and to a lesser extent Twitter. I pay for advertising in print media and on the web – and it is more expensive than the numbers responding.

The number of belly dance classes are growing in Christchurch. When I started belly dance in 1991 there was only one teacher – Farida. There was one – then two – classes held in her back shed. I think we could fit four people in there if we were not doing veil.

A couple of years later Gendi started teaching; first from home then hiring a studio and talking on another teacher (me) and finally buying her own hall. Now she’s gone – but there are over 10 other teachers in six groupings – there were more but the earthquake took its toll of teachers as well as venues and students. We have been pretty fortunate so far in that most of the teachers are experienced in both belly dance and have had some training in teaching. Not all cities are so lucky.

Each teacher has her own niche and generally the classes are spread by time and space – but Christchurch has less than 400 000 people. Many people like to give it a flutter then move on to other interesting tasters. Literally thousands of people have tried belly dance and the pool of new beginners (with the interest, time and discretionary spending) is becoming more difficult to fish every year.

Many years ago there were many places for people to put up notices for classes. Many of these were independent small retailers who were a part of the community. Now, many of these have been replaced by international consortiums whose image does not include a noticeboard. Some malls forbid tenants from displaying posters.

For a brief moment, the Christchurch City Council came to the rescue providing bollards for community notices but these were soon taken over by a commercial poster company who put up lots of the same very large posters on commission and instructed their staff to remove any poster not paid for through their company.

The there was Google Ads. When I started teaching, this was an economic way to reach interested people. Then another teacher in the area joined the program. Then another. Next thing you know we were in a bidding war. The only winners were the Google shareholders. I am now paying 20-40 times the amount for a click than I was initially. In addition to local competition, international retailers with deep pockets and big margins can pay highly to get the attention of New Zealanders.

Now, the best I can hope for is someone will spot a small poster for a belly dance class and be inspired enough to sign up. Nothing so far.
Posted by Kashmir at 7:20 PM No comments: