Past Beginner – Beginning to Perform 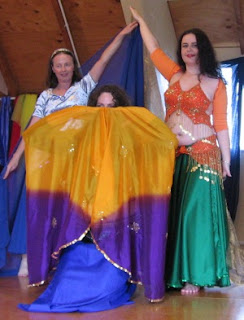 Having just seen the amusing animation "Why Yes, I Am a Professional Belly Dancer!" – I had to laugh but then started to think about just how much there is to learn. Or alternatively how much I need to teach those in my care.

Go onto most belly dance bulletin boards and there will be lists of things a beginner needs to learn. Most of these centre around movement generation – basic isolations, shimmies, undulations; the vocabulary of the dance. What makes that list will depend on a person’s style and experience. Some will also add props such as veil or zills. Some add some background knowledge of the culture and history of the dance.

So, let’s assume our student has all that – and now they are going to perform – in public. Hopefully those first forays are in a supportive environment of family and friends with something safe to dance. By that I mean, a piece within their technical ability, that they know well, and in an appropriate costume. Around here that is usually a 3 minute choreography in a group.
As teachers we often have to balance the chance to let someone perform who still hasn’t quite got it but who is really keen with our own reputation and the audience expectation. In a clearly student show you can cut them some slack. But I worry if a see a piece that none of the performers can handle – for instance something with lots of shimmy where none of the students can do more than flop around out of time to the music or a cane piece which tries to do tricky stuff but canes let loose, fly across the floor or injure other dancers. In these cases, the teacher needed to pull back her expectations and choreograph something that suited her students and made them look good.
Costumes can be tricky too. Students need guidance. They are students. For instance – “this item will require bra, belt and skirt. The skirt needs to be opaque under lights. The bra needs to fit and support your breasts.” In some cases suggestions on cut and colour are appropriate. For stage shows I now buy bolts of fabric or have class groups go out and pick material that suits them all. For galas and fairs I usually have a more relaxed approach but the general look needs to be similar.
Quality can be an issue. Here there has been an influx of cheap, nasty hip scarves. Personally I won’t have one worn in an Orientale piece – and only better quality ones in folk, shaabi or fusion pieces. Worst look I ever saw were students with one worn as a hip belt and another wrapped to (almost) hide their underwear bras.
This becomes even more of an issue as students start to do their own work. If a teacher doesn’t tell her student bedleh is not appropriate for beledi how are they going to learn? With student troupes, some times intervention is needed for the overall look and balance; for instance costume colour, physical shape and ability needs to be considered for the final presentation.

And it is when the students get past those first simple dances to pop pieces that things start to get tricky. Especially when they need to know their cultural references. “Your solo music is old style beledi – I suggest you wear a dress – forget the veil – and stop waving your arms in the air”. “This music is sa`iidi – why are you dressed as a harem slave?”

But the hardest thing to get across is the feel of a style. I recently saw an Orientale piece that was appropriately choreographed. The students did all the movements correctly – yet didn’t. The problem was they didn’t seem to get the styles being referenced. Was it nerves? Lack of preparation? Unfamiliarity of the underlying styles? This is one reason I believe any one other than a hobbist needs solid folkloric performance experience before tackling “grown up” belly dance. This is what sa`iidi is meant to feel like. This is how you move in khaleegi. This is beledi. This is debke. Then when 32 counts need to be slotted in they will know what they are trying to do.
Another issue that is hard to get across to students (believe me I have the same problem) the need to appear to engage with the audience: relaxed faces, smiles when appropriate; relaxed upper bodies. I think many of us over emphasise the isolation needed and instead of working hips and shoulders independently they end up holding their torso rigid – often with rigid hands as well. One teacher (Elenie) once said to me that the shoulder girdle communicates emotion – and I think she is right. The plastic Barbie look occurs with a plastered on smile and cold unmoving shoulders. And this year Momo repeated the idea by saying that the face and shoulders expressed the soul.
But of course, many skip all these boring lessons and go straight to being a pro belly dancer.
Posted by Kashmir at 4:43 PM 1 comment:

This was the 16th Brisbane Winter Warm Up and the first with Momo Kadous. I admit I signed up a little unsure of whether I was making a mistake in times when every dollar needed to be carefully placed. I knew nothing about him other than he was Egyptian and recommended by Dr Mo Geddawi as a replacement when he, himself, was unable to take his planned workshops and teacher training. And it looked like too much Orientale and not enough folklore.

But I am so glad I went! His dance style was interesting, his approach to the dance on my wave length, he added a session on shaabi flavoured dance – and I was reminded a lot about teaching from watching him teach. I intend to make more of an effort to incorporate some of these aspects:

His philosophy that a dancer should dance for herself – but present for the audience. So, we were being continually being pulled up on the awareness of where the audience was; what they could see. Right from the first hour when we were just learning some new combinations; head, torso, arms, hands.

Humour – Momo was happy to use humour to release tension in the class (who wants a tense belly dancer!) – even when he could be seen as the butt of his own humour. Sometimes belly dancers get just too precious about themselves and their art. Laugh!

Repetition – we learnt it at Teachers’ College – the “broken record” technique – and I thought I was doing it. But I’m a rank amateur. More repetition needed. There were some points he made every few hours over the four days. Not because we were particularly slow, but, he stressed, he wanted to make sure his changes had become habits that would be hard to break.

He also demonstrated using different learning methods. For instance during the drum solo. We’d sing the rhythm then tap it out and only then use our hips and feet.

Mixing individual and class correction (yes, this was a workshop teacher who would come down and ask if you’d “left your left hip at home? Why not bring it to class?”). And yes, I do correct – but I find I self censor – “she won’t want me to say that again”, “they just want to get to the end of the choreography” – yet, as the student, I found those interruptions valuable.

He closely targeted some corrections, staying on the target until she had made a reasonable attempt to change what she was doing. Or he just did the eye and the gesture which would get half the class checking their hips, or their footwork or their flapping hands. Or he would stop what he was doing completely to go over a particular point: varying from a makeshift creation of a barre to practice lifting our legs like dancers not like footballers to repeating a short sequence over and over to a drum track.

All obvious. All stuff I know. But it was good to see someone using it in such an effective way. And the content of the workshops? Also excellent. We had classes in technique, drum solo, Khaleegi, shaabi and Orientale. In each class, in addition to the dancing, Momo explained the music, the lyrics if there were any, and any relevant cultural and staging information.

Momo Kadous is well worth keeping an eye out for.
Posted by Kashmir at 8:09 PM No comments: