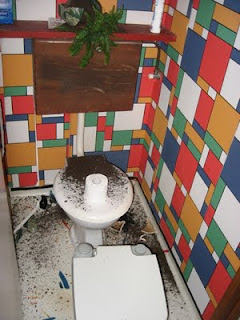 My next blog was meant to be about stretching – but another earthquake has pushed itself into my consciousness. You’d think after over 7000 odd since September we’d be over them – but this one was very pushy.

I’d finally decided to tidy up and put away. After all we’d had nothing significant for a while. The last three magnitude 5 pluses were on the west side of town so were no big deal in Brighton. (For those of you not blessed by earthquakes the magnitude is logarithmic and measures the energy at the epicentre. A 7 is about 30 times as powerful as a 6 and a 9 is about 900 times as powerful as a 7. But a 7.1 several km away can have less effect than a 6.3 right under you. It also makes a difference how deep the fault is. Christchurch’s little darlings were only 5-15km below the surface.)

So Monday the 13th arrives. I’ve arranged to cook for eight people for dinner at a friend’s. No need for the gas cooker I was lent in February – power’s been up for weeks. Ditto the water, in nice heavy pots in the kitchen. Won’t waste it but pour it into plastic containers and put it in the laundry (spoiler alert!). Now, start with soup – I’ll complete it and microwave it when I get there (spoiler alert!).

Across town to get the meat I want (my local shops are open but didn’t have the right cut and closer possibilities are still munted). I’m making pörkölt – a Hungarian stew with lots of paprika. Right, it’s underway. I can replace some of my ornaments on the shelves. Will still keep the heavy ones on the floor but the light stuff should be safe enough. 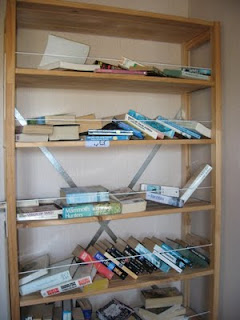 Next job: bookshelves. All but one have been screwed to the wall – but the books still fly out with the shaking. I’d decided to lace the front and fill in the sides to reduce this. And I’d come up with a method to secure the last bookcase. I’ll tackle it once I finish the lacing etc. (spoiler alert).

So, I’m crouched down with my screwdriver when another aftershock hits. At first I didn’t pay it much attention. But there is something about feeling like you are on a giant waterbed, while suspended over the cavity which is a garage and under another storey made of heavy beams, that give you pause. And what’s more it is continuing and I can here things crashing. It’s a big one. (5.3M as it turns out)

Poor Isis. Light and tall she’s hit the floor for the third time – very undignified for a Goddess. A bit of bluetack will fix that. What about the rest of the stuff? Pretty heavy; still on the shelves; just push them back a bit (they’ve moved forward a few centimetres). No real damage. Fill in a GeoNet report. Update my Facebook status with something light and time to start the potatoes.

Not too keen to go back into that bedroom though. Empty the chemical toilet? No, not while cooking. Maybe wash the kitchen floor now I’ve had reliable water for a few weeks. It’s pretty grubby after 4 months and won’t take much water – but maybe I’ll wait until I finish cooking. Potter, potter. … Wham! Thump! Thump! (that’s the stereo speakers) Crash! (CRT monitor) Thunk tinkle! (1 litre of olive oil from bench to floor – with plates)

Egyptian reproductions? Isis is standing firm – but the fake stone carvings are scattered across the floor. Books? Most still on the shelves with only some on the floor. Bookshelf? Yes, crashed over the bed – sans books (now on floor, again) With a broken water main outside my neighbour’s, how’s my supply. Trickle … and gone – but I do have 10l on the floor of the laundry.

Off the check the neighbours. Pat and calm their dogs. Now, how’s the bridge? Traffic is flowing both ways but I want to see if it is passable with my little car which doesn’t take kindly to 200mm steps in the road. Never made it on foot between the new liquefaction and broken water mains meant I needed gumboots – and nerve (some of the liquefaction holes can be very, very deep).

I get a text that the dinner venue while without power (like me) – does have a generator and gas. So I pack up the food – soup, pörkölt, vegetarian alternative, potatoes (uncooked). I’m giving desert a miss. Oh, and spare clothes, a radio, torch, batteries, cash – and a camera. 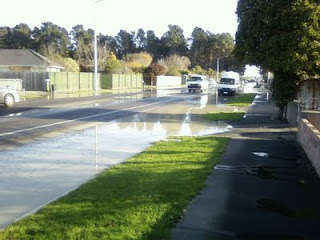 Off I go. Only now there is a queue for the bridge – too late it’s closed. U-turn. Maybe the Brighton bridge is open. Opps, the flooding is a bit deep – I’ll go via the mall. Missed the worst of it – and it’s closed. Won’t follow the river – they still haven’t fixed the road from September. It’ll definitely be under water – but Bower Ave bridge was almost okay last time. Head back to the coast then cut back. Not this time – but at least they had someone on the roundabout. Anzac Drive? Nice new bridge? Nope – and this time I had to go the whole distance through the flooding which filled the bits of road that had slumped about half a metre – either this time or earlier. Nice young man says I have to go west – so I do and realize I’m heading into Dallington! River flooding to the left, cars back up ahead, liquefaction almost covering the crown of the road. I cannot risk a U-turn that may get me into the unknown – cars have been swallowed by liquefaction holes. So it’s a 3 (or 4) point turn. Onward.

Back via Stanmore Road, where only this morning this building – and that - were standing. No more. But now at least there’s little road damage, flooding or liquefaction. Then - at last – after only 80 minutes and 67km I have complete a trip that is normally 6km and takes under 10 minutes.

The dinner went very well. All but one guest could make it. We ate in the ambience of 17 candles and I wore earthquake chic – silt covered shoes and a head lamp. (The gennie turned out to be only for the server)

There was one surreal moment when I left the roar of the gennie to visit the Port-a-loo and heard a strange sound echoing around the hills. It almost sounded like a call to prayer – a drone with indistinct words. But it turned out to be an automated evacuation message “Please evacuate the building immediately. Do not return for personal possessions. Immediately make for the assembly point”. One positive side effect of the 5.6 at 1pm was that malls and most buildings had already been evacuated when the 6.3 hit at 2:20pm. 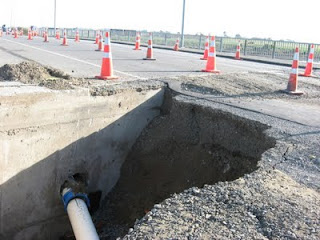 PS Power now back on and bridge open. Main problem was washout due to burst water pipe – hence still without water over here. Guess the floor will have to wait a bit longer!

(And here is my thoughts back in March Reflections Five Weeks After the Earthquake)
Posted by Kashmir at 3:33 PM 2 comments: