Reflections Five Weeks After the Earthquake 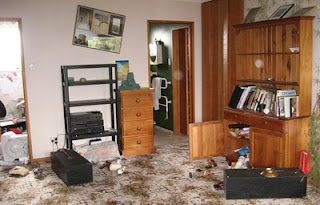 A break from dance related topics to give a personal view of living in Christchurch five weeks after the 22 February earthquake.

The news was initially filled with the shocking images of destroyed buildings, rescue workers and the army. Now most of the dead have been recovered; yesterday some business people were allowed back into the red zone to recover essential equipment and records; buildings are being removed, roads cleared, and life tries to get back to normal. But it isn’t – quite.

Here’s what it is like living in South Brighton – an area barely affected by the quake – very few houses are written off for example, but still …

Power
I was lucky and got power back after just nine days. Across the road they needed to wait a bit longer. The houses fed by the New Brighton substation are being fed via huge generators as the substation took significant damage (it sunk about 1.5m into the ground, all four incoming cables and the ten outgoing ones were “buggered”; they ran overhead lines several kilometres to another substation to try and get over the problems)

So, five weeks on we have power – but we are advised to avoid using electric heating – including jugs and ranges – unless absolutely necessary. This is especially the case from 5-7pm where a sudden switching on of appliances can lead to the power going off. This restriction covers all of the eastern and southern suburbs – I’d say at least half of Christchurch.

I was very pleased I had held out for replacing my log burner with another log burner – not the alternatives pushed by the council which required electricity to run. Only problem was, set in the middle of the house, there was no natural light and all cooking needed to be completed by dusk. Later, a friend lent me a portable gas stove. I continue to stash torches (with good batteries) all over the house – just in case. 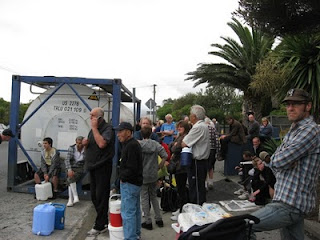 Next service to be reconnected was water – a trickle started coming through after 3 weeks – not enough to fill the hot water tank though. When pressure was restored my damaged pipes blew apart so I was off again until my father came over and capped the errant pipe (and at the same time fixed the four doors which no longer closed due to slight movement). At this stage we still have a boil water notice in effect.

What happened in the meantime? Well, only a day after the quake they had a water tanker at the local school. Hundreds of people queued for water with a range of containers – from empty 2l ice cream containers, to empty rubbish bins – and waited for a means of getting the water out of the tank (there was no fitting to release the water) - after 2 1/2 hours I walked home without any! One of my neighbours was singing “don’t have to live like a refugee”.

I had emergency water to drink – and some unbroken beer and wine for follow up. But had never considered how much water is needed for cooking – let alone washing dishes (I can now do a sinkful in 2l). Washing clothes and bodies were not even considered. We all stank equally.

Currently the whole city is on water restrictions – but my garden died in the first few weeks so I’m not tempted to try and bring it back to life before spring. 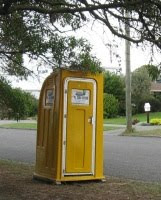 This is still not operational for about 160 000 people. Many people have toilets that flush – but for many it doesn’t leave the property, or it may only to be blocked by broken or silt filled pipes further along. The overflow flows into the rivers and estuary – or are actively pumped into them. That’s the story here – but at least it doesn’t flow in the streets like in some places.

However, if they could get it all to the treatment station it wouldn’t help as it is running at only 70% capacity due to damage.

Needless to say you cannot swim at the beach – let alone do any water sports on the rivers or estuaries. People have already got sick. They are recommending to keep even dogs out of the water.

They started with thousands of Port-a-loos but since have handed out tens of thousands of chemical toilets as this will continue for 3-4 months (all going well). Note, to those who don’t have one – emptying them is not a pleasant chore. 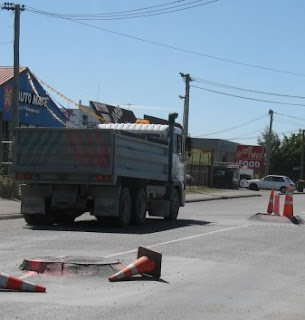 Within days they had filled many of the small car sized holes in the road (no joke we are talking metres wide and half a metre - at least - deep). The 18 broken bridges are now mostly passable – although many are limited to under 3.5 tonne. Many of the roads are restricted to 30km/h – which can be too fast if you drive over a outstanding manholes (they rose with the liquidfaction) due to poor visibility. Potholes, waves, sinks, cracks are all a normal part of driving now. Trips take often twice as long as before. Adding to the traffic problems are the cordoned off parts of the city with rubble or danger of falling masonry.

Let me explain. A good route is one with about 50% gravel and only a couple of bone jarring ridges. Bad routes slow you down to a crawl. Detours and single lanes are common. “Water” on the road is not unusual – and you always suspect it’s raw sewage. But at least most of the silt has been removed.

Business
We are quite lucky here – we got our supermarket back up and running after only a few weeks. Many other suburbs around here are still without any supermarkets, fruit and vege or butchers – so ours has become a little busy. Still better than a 45 minute drive across town which I had to do for the first few weeks though.

Many of the big banks here are still closed.

The two nearest malls are closed (but who would enter a mall again?).

Obviously, central city is out of the question.

I have dropped half my dance classes due to students who have left town or are unable to get here – or are just too stressed due to losing their houses and/or jobs.

My day job clients were mostly based in the CBD and if they are working at all are just holding on and only calling on IT help for urgent issues. Forget pretty upgrades, new features or training.

So, we are still here and trying to make a go of it – but it’ll be a long time before it is anything like “normal” again. In the meantime – make sure you have at least 10 litres of drinkable water, containers for still more, investigate a bypass on your downpipe (and a barrel to hold the rain water), food that you can eat without cooking or water, torches, a battery or solar radio, batteries, portable cell phone chargers, direct plug in landline phones, gas or wood cooking facilties – and a pack of cards.

(And here is the June update - Monday 13 June - Earthquakes again)
Posted by Kashmir at 3:15 PM 5 comments: